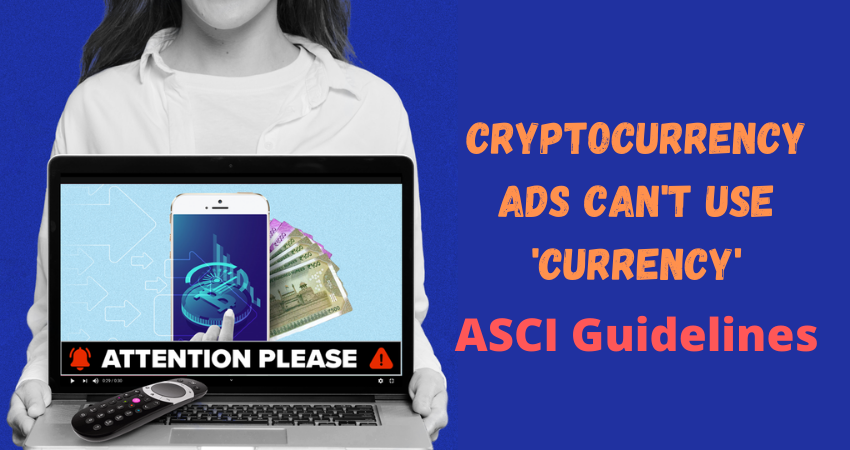 Cryptocurrency is becoming very popular in India. Several cryptocurrency exchanges are active, the number of investors is also rising every day. Due to rising crypto popularity, the Advertising Standards Council of India (ASCI) has framed new guidelines for the advertisement of virtual digital assets.

India has the highest number of cryptocurrency traders in the world. And to gain more and more customers the cryptocurrency exchanges have started aggressive advertisements in the last two years. Many TV stars and other celebrities have also started promoting the crypto exchanges on Youtube and TV commercials. Virtual Digital assets exchanges have spent crores of rupees on advertisements.

According to ASCI all these advertisements and TV commercials do not adequately disclose the risk associated with virtual digital assets and NFTs. And for the safety of consumers, ASCI decided to change the advertisement rules with new guidelines.

According to ASCI’s new guidelines, “Crypto products and NFTs are unregulated and can be highly risky. There may be no regulatory recourse for any loss from such transactions.”

While advertising on social media, the disclaimer must be carried in both the caption as well as any picture or video attachments. In social media stories which get disappeared in 24 hours, the disclaimer will not be voiced at the end of the story. In case of limit of characters in advertisements a short disclaimer, “Crypto products and NFTs are unregulated and risky” must be given.

In new guidelines, the use of words “currency”, “securities”, “custodian” and “depositories” may not be used in the advertisements of virtual digital assets and NFTs.

All these new ASCI guidelines will be applicable to all advertisements released or published on or after April 1, 2022. And all earlier working advertisements need to be modified according to these guidelines.