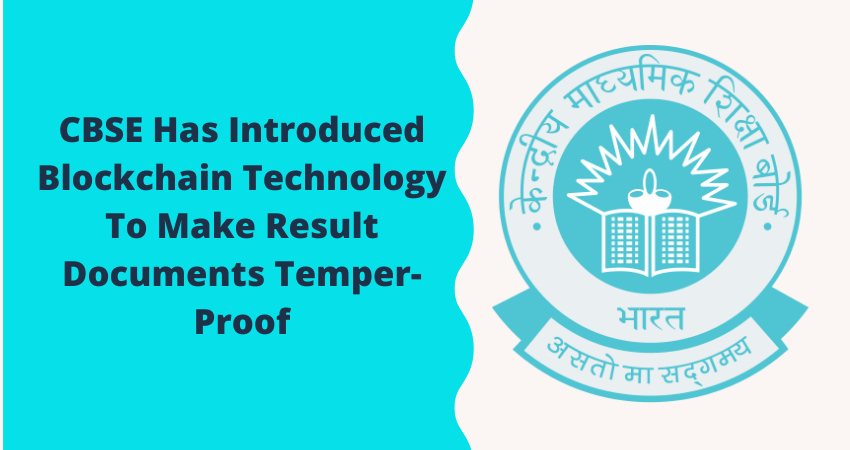 We have another good news for cryptocurrency and Blockchain technology lovers. After Maharashtra, another educational institute of India is going to accept Blockchain technology in their education system. CBSE will store the exam results of 10th and 12th students in the Blockchain system to make it tamper-proof to ensure maximum security without wastage of paper.

In an interview with a news agency ANI, CBSE’s director of Information and Technology Antriksh Johri said, “Blockchain implementation has been done by CBSE. Earlier we introduced Artificial intelligence (AI) and Machine learning (ML) for affiliation systems. Here, the data is linked and stored with cryptographic security so that it is immutable and traceable.”

The CBSE’s Director also said, “This will serve as a single source of truthful data for verification for students going for higher education or employment.”

The Central Board of Secondary Education (CBSE) educational institute which was established in 1929 by the government of India has collaborated with the Centre of Excellence for Blockchain Technology of the National Informatics Centre under the Ministry of Electronics and Information Technology (MeitY) to develop the ‘Academic (Blockchain) Documents’ software.

The CBSE board has decided this due to the security of the Blockchain system. Blockchain technology stores the whole data in distributed ledger with the ownership of all stakeholders. All the data is in Blockchain is linked and stored with cryptographic security making it immutable and traceable along with maximum security. The is no need for third-party verification of the data. It makes the data secure and tamper-proof.

The acceptance of Blockchain technology by CBSE which is established by the government of India is another big step. We hope in the future more companies and government agencies will adopt Blockchain.