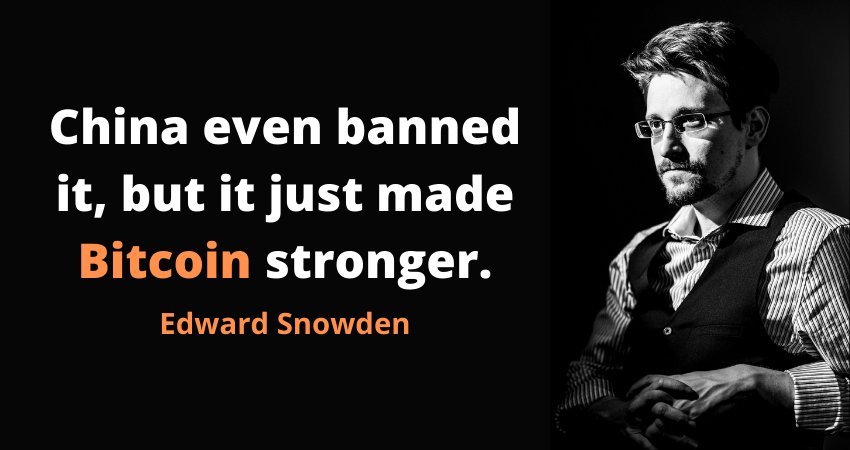 At starting of October month the price of Bitcoin is almost 10% up and it’s increasing continuously. After the full cryptocurrency ban in China by the Chinese government, some people were predicting the crypto market crash and on the other, some people were also predicting a crypto boom in the month of October.

Now a famous whistleblower Edward Snowden has also joined the list of people who believes the Chinese crypto ban is Good for Bitcoin. Snowden said in his Tweet, “China even banned it, but it just made Bitcoin stronger.”

Who is Edward Snowden?

Edward Snowden has come in headlines in 2013 when he stole and leaked the secret documents from the National Security Agency (NSA), which was his workplace. Snowden was a hacker and programmer who helped the NSA in various government programs of surveillance, espionage, computer hacking, phone tapping, and more. In 2016 a movie based on his story has been released by director Oliver Stone.

He has also written a tagline, “I used to work for the government. Now I work for the public. President at @FreedomofPress.” on his Twitter profile.

Why Chinese Ban is Good for Bitcoin?

At this time the most populated country of this globe is against cryptocurrency. In September China has fully banned the transactions by issuing strict guidelines to China’s Central Bank. In May 2021, China has also closed all doors for Bitcoin miners, after that the many miners have closed their services and some moved to another friendly country.

Now it seems all these Chinese bans on Bitcoin mining and crypto transactions have no impact on the prices of Bitcoin. Even after these bans, the crypto market keeps growing in the short term drops of BTC and other Altcoins.