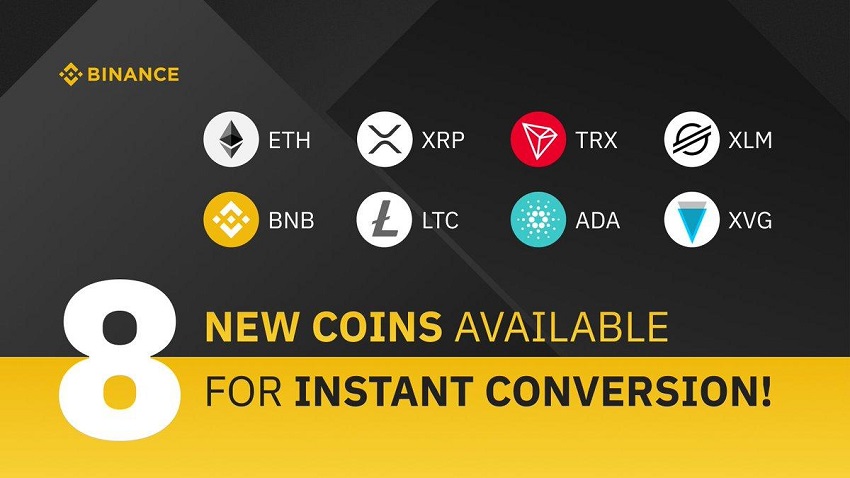 Lately, Binance added 8 new crypto assets in its kitty. The newly launched assets are ETH, XRP, TRX, XLM, BNB, LTC, ADA, and XVG. Binance which is basically a bifurcation of two words binary and finance. It is a peer to peer trading organization crypto exchange company. It was founded by Changpeng Zhao and Yi He in 2017. It is regarded as a humongous cryptocurrency trading organization in the world. The headquarters are located in Malta which is based in Europe.

It is a wonderful asset for cryptocurrency traders, users or bettors because they consider it a safe and secure way to deal with currency and assets. As a layman point of view, no one can deposit flat currency and no one can withdraw fiat currency in their bitcoin wallets. That’s why traders use it effectively and wisely.

Binance has suddenly surged in recent years due to low transaction costs, high liquidity, and various discount offer if users pay from native currency which is called BNB tokens.

Following are the crypto assets which are recently added in Binance or you can say launched by Binance to its convert functions:

Let’s start with the first one

1. ETH: The full form of ETH is Ethereum. It is a kind of blockchain technology distributed machine platform. It also consists of a smart contract also called scripting functionality. It renders decentralized virtual applications and process scripts using some public nodes. Vitalik Buterin proposed this platform in 2013 who himself was a researcher and programmer in this field. The first logo was used in 2014. It was written in C++, Go and Python. Currently, its price is 235 US Dollars which is huge if you buy a few bitcoins. Generally, its price varies and fluctuates as per market trends.

2. XRP: The full form of XRP is Ripple. Ripple is a real-time gross settlement, kind of currency exchange and network launched by Ripple Labs which is based in the United States of America. Ripple is built upon various open-source protocols and it holds up tokens of fiat currency, cryptocurrency, commodities and other forms of value(in the form of currency). The original authors of Ripple are Arthur Britto, David Schwartz, and Ryan Fugger. It was released in 2012. It was written in C++. The operating systems used are Ubuntu, macOS, Linux. It is generally used in banks to do transactions like sending money and receiving money which makes it affordable. Currently, XRP is the third most valuable cryptocurrency in the world besides bitcoin and Ethereum. Its price is 0.28 US dollars as of now.

3. TRX: The full form of TRX is Tronix alias TRON. It is a kind of blockchain operating system and a decentralized platform. It was founded by a non-profit foundation which is based upon Singapore. The name of the foundation is the Tron foundation. TRON is a globally distributed entertainment system with storage ability and capacity. It has features of blockchain and peers to peer technology. It tries to reduce the gap between content creators and content consumers by cutting/eliminating middlemen. The outcome will have cost reduction and improved collection of direct receipts which involves a win-win situation for both. TRX price is almost zero dollars say 0.02 US dollars.

4. XLM: The XLM stands for Stellar Lumens. Basically it represents a native asset of open source just like USD also called distributed payment infrastructure. It is a kind of digital token just like BTC (Bitcoins) which works through blockchain technology. Stellar Lumens has been given an exquisite name because it separates them from the current network they run on and from the organization that created them. It is the twentieth most famous cryptocurrency in the world. It has a market cap of around 662 million dollars. It was created and launched by the Stellar Development Foundation. The team members include Kamal Ravikant and Matt Mullenwag. Its price is 0.06 US Dollars.

5. BNB: The BNB stands for Binance coin. It is the second-largest cryptocurrency in the world having market capitalization around 6 Billion US Dollars. It has grown rapidly since its inception. It was launched as an ERC token but then it was transferred to Binance Chain. It is used by traders and also used in paying travel expenses. Besides, it is also used to pay donations to charity through the Binance Charity Foundation (BCF) project. BNB price is around 25 US Dollars as of now, it might increase in the near future.

6. LTC: LTC is called Litecoin. It is competing against numerous aspiring alternatives such as Bitcoin, etc. It is considered as the third-largest cryptocurrency in the world after its counterparts Bitcoin and XRP. It uses currency like PayPal, Paytm, etc. However, it used Litecoins instead of US Dollars. Litecoins are not issued by any Federal Reserve but they are created by a procedure called mining. There are only 84 million Litecoins created as of now not more than that. It costs around the thousandth part of a Litecoin to process a transaction, regardless of its size as compared with PayPal’s 3% fee. The price of Litecoin is around 80 US Dollars.

7. ADA: The full form of ADA is Cardano. We have a lot of cryptocurrencies in the world, ADA is one of them which is used as the native currency of the Cardano Platform. It is recognized as a smart contract-based system and it runs on Decentralized Apps just like Ethereum. It was developed by Charles Hoskinson who also founded Ethereum. It is called third-generation technology after Bitcoin and Ethereum. It is a great option for big companies which involve big smart contracts. The ADA price is 0.06 US Dollars.

8. XVG: XVG stands for Verge. It is a new cryptocurrency used in the world. It is a kind of decentralized open-source currency that obscures the IP address of users with the TOR browser during the transactions. The advantage is that the user’s location can not be tracked easily.

It is also called DogeCoinDark when it first created in 2014 and then it is called Verge currency in 2016. This platform makes all the transactions totally untraceable. The price of XVG is 0.005 US Dollars which is almost zero.