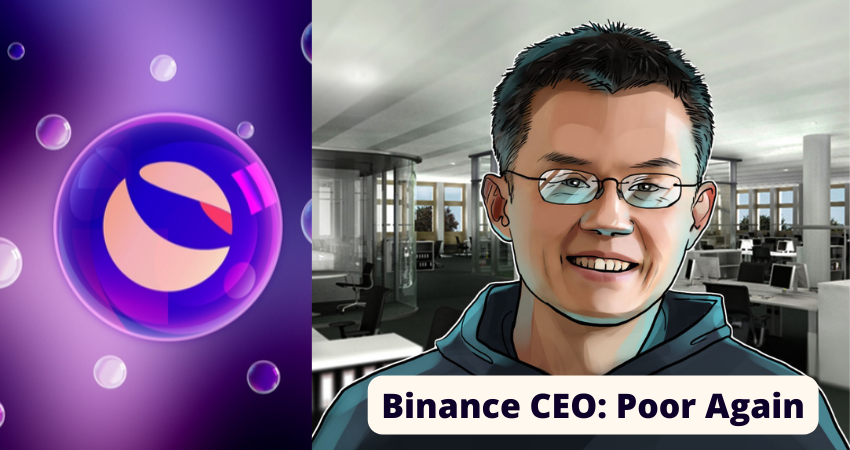 After the crash of Terra’s Luna and UST, many people lost their investments. Both these coins have almost lost their value. The investors of these coins are scratching their heads after losing everything in these coins.

Chanpeng Zhao is also one of them, who has lost their money in Luna and UST. He is the founder of the world’s largest cryptocurrency exchange Binance in terms of the trading volume.

Chanpeng Zhao tweeted a few days ago that he is “Poor Again” after the crash of Luna. He has lost millions of dollars in these coins. Before this crash, the Binance assets in these coins were approximately $1.6 billion during the token’s peak price in the month of April and now these are just $2200.

Read Also: Will $LUNA & $UST By Terra Recover Its Value?

Zhao said in a tweet that the Binance held 15 million Luna tokens, which the exchange was obtained with a $3 million investment in the Terra network. And these Luna tokens were never moved or sold.

Before this crash, Luna’s highest price was nearly $119 and the fall began when TerraUSD (UST), its sister coin lost its peg to the USD. Both tokens Luna and UST’s prices are linked and when TerraUSD dropped, then Luna’s investors started selling their holdings and Luna’s price dropped by more than 99%.

Despite this huge crash, Zhao has a net worth of around $14.9 billion. The majority of his wealth is due to a 70% stake in the Binance exchange.

Chanpeng Zhao also urged Terraform Labs team to make reimbursing its retail investors a top priority. In his tweet, he said, “To lead by example on protecting users, Binance will let this go and ask the Terra project team to compensate the retails users first, Binance last, if ever.”

Terraform Labs was founded by Daniel Shin and Do Kwon in January 2018. The exchange raised $32 million from investors from Binance, OKEx, and Huobi.

Related Article: Do Kwon Creator Of Terra Is Facing Prosecution In South Korea