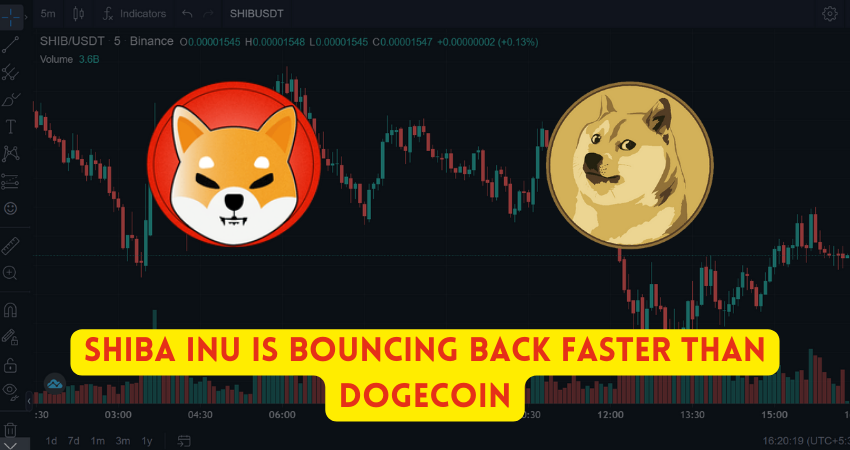 After Crypto Crash Shiba Inu Is Bouncing Back Faster Than Dogecoin

The whole cryptocurrency market crashed on Monday due to US Federal Reserve raised interest rates and institutional investors are withdrawing their funds from crypto assets.

Today the cryptocurrency market is showing a few green candles after Monday’s sudden drastic crash. Bitcoin, Ethereum, Ripple, and all other major coins including others fell by more than 10% from their value in a single day. Today overall the market is up a few percent from the last crash. If we talk about the famous meme coin Shiba Inu and its rival Dogecoin, Shiba Inu is rising very fast as a compared rival, Dogecoin.

Now according to CoinMarketCap, the price of Shiba Inu has increased more than 5% over the last 24 hours as of writing this post. Dogecoin on the other hand has increased less than 1% in 24 hours.

Read Also: SHIBA Inu Vs Dogecoin: Who Will Cross The $1 Mark?

Why Shiba Inu is Recovering Faster Than Dogecoin?

Both meme coins are recovering from sudden fell but SHIB is recovering faster than Dogecoin. The exact reason behind this is not clear and there is no tweet or news from the creator of the SHIB meme coin.

All meme coins are more volatile as compared to other coins and a small change in market conditions can drag the price of meme coins in any direction.

Bitcoin is trading at $31,578.25 after breaking the $40,000 level. Ethereum, Apecoin, Solana, Terra, Luna, Ripple, and other famous coins have also lost their significant values during this market crash.