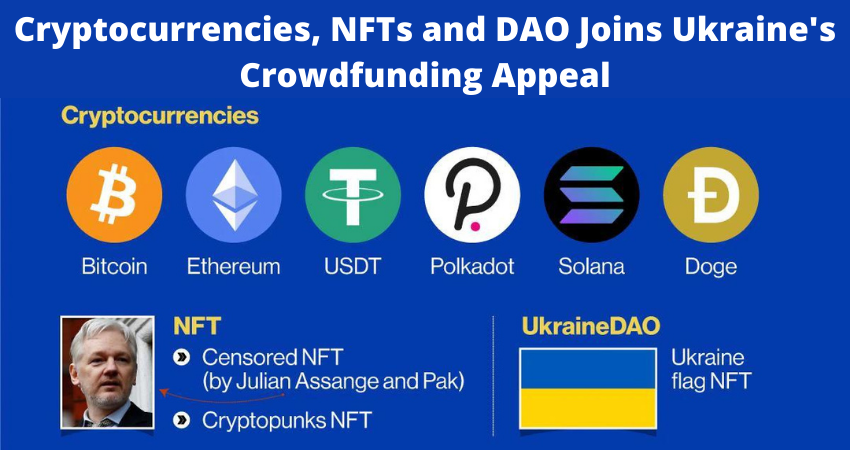 Ukraine Vs Russia War is becoming very deadly, many soldiers and innocent people have lost their lives. Every day Russia intensifies the attacks on Ukrainian cities. Ukraine is a small country as compared to Russia, and to protect their country from the Russian invasion, Ukraine appealed for crowdfunding.

After Ukraine’s appeal, Crypto assets are playing a pivotal role in raising funds for Ukraine to provide resistance against the Russian invasion. According to reports, the global crypto community has raised its hands to support Ukraine amid the crisis.

Here we are going to provide a list of crypto assets accepted by Ukraine for crowdfunding for support in the war with Russia.

All above-listed cryptocurrencies are currently accepted by the Ukrainian government.

Recently the Vice Prime Minister of Ukraine Mykhailo Fedorov announced that they would start accepting two new cryptocurrencies to raise funds for Ukrainian armed forces. He also said that Ukraine has set up an official wallet address for donations in Solana.

On Wednesday, The Vice Prime Minister announced that the country has started accepting Dogecoin after the Russian Rouble fell as compared to the value of the meme coin (DOGE).

And now Non Fungible Tokens (NFTs) are also being used to crowdfund Ukraine to provide support in the war. Till now the country has received $1.86 million after the sale of Censored NFT. CryptoPunk NFT whose value is worth over $200,000 has been donated to Ukraine. And now people have also started sending NFTs directly to the Ukrainian government’s Ethereum account.

After Cryptocurrency and NFTs, DAO has also joined hands with the Ukrainian government. A Russian pop artist from the band Pussy Riot and crypto enthusiasts formed a Decentralised Autonomous Organization (DAO) also called UkraineDAO to raise funds for an organization in Ukraine to support Ukrainian armed forces. Recently UkraineDAO has raised $6.5 million in Ethereum after auctioning off an NFT of the Ukrainian flag, which was the 10th most expensive NFT sold ever.

We hope all this will work for Ukraine and we pray the war will end soon. No one wants to lose a life, we appeal to people across the globe to pressurize their governments to interfere in the war and stop it as soon as possible.